How to Measure Government. . .  Not Left or Right but by Power

To most Americans our government is defined by either Left (Democrats) or Right (Republicans). Although this system of defining government seems as if  a logical way of looking at things, it misses the something important.  On the surface this might hold some weight but what about the monster lingering underneath? The monster I speak of is the power government wields over its people. The Austrian economist Ludwig Von Mises said, "Government is essentially the negation of liberty." I want to use this quote to explain the type of power government has. Mises is pointing out that government is not related to liberty is their definitions. Government is only related to liberty in the way that government takes away liberties not gives liberties.

That is the type of power governments wield, the taking away of our liberties. Our Founding Fathers were very aware of this power that all governments share and needed a way to measure those powers because they were well against the accumulation of such powers to the national level and defined it as tyranny. They saw the political spectrum as a balance between Tyranny and Anarchy; Tyranny being Ruler's Law and Anarchy being No Law and People's Law being the balance between Tyranny and Anarchy. 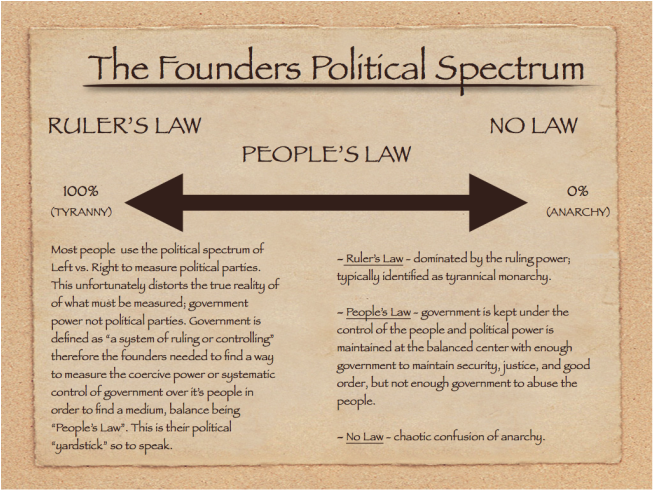 The Founders looked to the ancient anglo-saxons, and particularly Thomas Jefferson, for the balance between Tyranny and Anarchy. The People's Law have characteristics primarily opposite from Ruler's Law which defines the term Tyranny. The People's Law should be looked at as principles to be followed by a republic government. The Ruler's Law should be looked as principles to be followed by a tyrannical government, everything opposite of a government by the people, for the people. Here are both the principles; one being slavery and the other freedom:

1. Authority under Ruler’s Law is nearly always established by force, violence and conquest.

2. Therefore, all sovereign power is considered to be in the conqueror or his descendants.

3. The people are not equal, but are divided into classes, and are all looked upon as subjects of the king [the state].

4. The entire country is considered to be the property of the ruler, who speaks of it as his “realm” [homeland].

5. The thrust of government power is from the top down, not from the people upward.

6. The people have no unalienable rights. The King giveth and the King taketh away.

7. Government is by the whims of men, not by the fixed rule of law which the people need in order to govern the affairs with confidence.

8. The Ruler issues edicts which are called “The Law,” who then interprets the law and enforces it, thus maintaining tyrannical control over the people

9. Problems are always solved by issuing more edicts or laws, setting up more bureaus, harassing the people with more regulators, and charging the people for these “services” by continually adding to their burden of taxes.

10. Freedom is never looked upon as a viable solution to anything.

11. The long history of Ruler’s Law is one of blood and terror, both anciently and in modern times. Under it, the people are stratified into an aristocracy of the Ruler’s retinue while the law to the common people is one of perpetual poverty, excessive taxation, stringent regulations and a continuous existence of misery.

1. The Anglo-Saxons considered themselves a commonwealth of freemen.

2. All decisions and the selection of leaders had to be with the consent of the people, preferably by full consensus, not just a majority.

3. The laws by which they were governed were considered natural laws given by divine dispensation, and were so well known by the people they did not have to be written down.

4. Power was dispersed among the people and never allowed to concentrate in any one person or group. Even in time of war, the authority granted to the leaders was temporary and the power of the people to remove them was direct and simple.

5. Primary responsibility for resolving problems rested first of all with the individual, then the family, then the tribe or community, then the region, and finally, the nation.

7. They believed the right of the individual were considered unalienable and could not be violated without risking the wrath of divine justice as well as civil retribution by the people's judges.

9; They always attempted to solve problems on the level where the problems on the level where the problem originated. If this was impossible they went no higher than was absolutely necessary to get a remedy. Usually only the most complex problems involving the welfare of the whole people, or a large segment of the people, ever went to the leaders for solution. 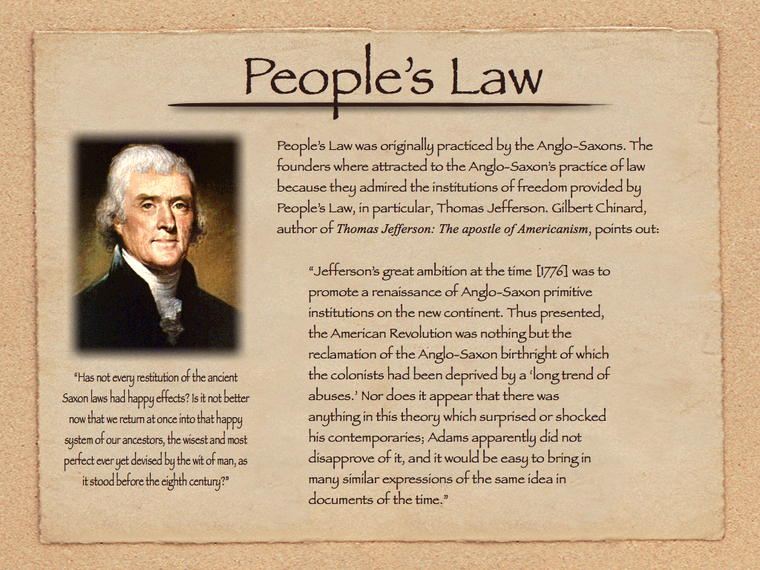